About revolutionaries and armies

Until the end of the 19th century, in a number of the largest and most influential powers, the army had been a kind of hard labor where an ordinary man, a soldier, could count on survival only. Powers, privileges and career opportunities had been in the hands of the commanding officers, treating soldiers as supplies. The only exceptions being the forces of those countries in which the revolution had won.

Thus, volunteers went en masse into the army of the first French Republic, for ideological reasons. The military patriotism of that time gave formerly disenfranchised French the opportunity to make an independent decision and rely on its fruits.

The army of the French Republic in battle against the Prussian interventionists under Valme, September 1792

The old empires had been able to achieve goodwill from the patrials only towards the 20th century, but far from all social groups. The German Empire could count, for example, on patriotic high school students, ready to rush for the fatherland into trenches. In the Russian Empire, the students of military schools joyously died for their faith, the tsar and the fatherland. The ideological heir of the Empire — the White Movement — and all allegedly «Voluntaria».

The 20-th-century revolutions that destroyed the old order in continental Europe made real military patriotism really possible. After 20 years, every schoolboy and every hard worker of the Nazi Germany could count on exalting his disguise in a soldier’s coat. Henceforth, the soldier was not a despised piece of meat, which should burn for the monarchy, but an honorary accomplice in the social project. 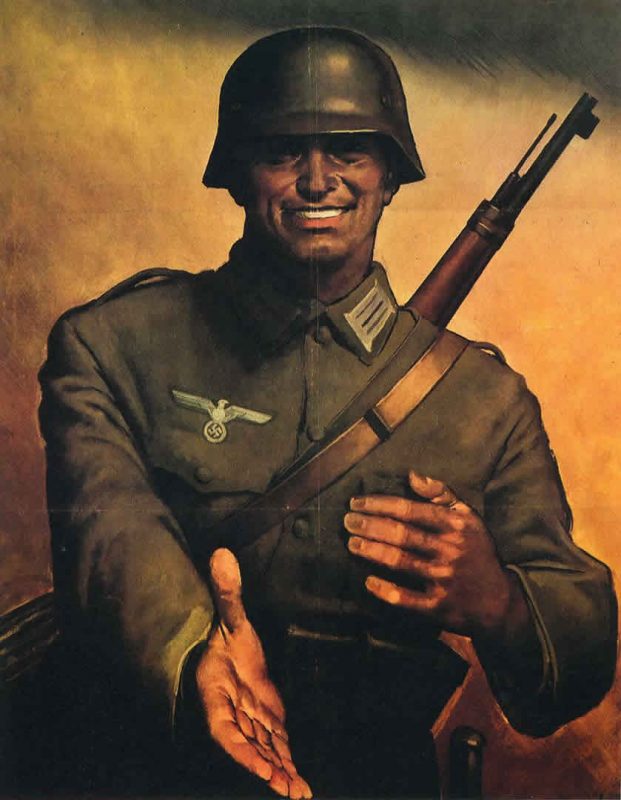 It is characteristic that both fascist and revolutionary armies had much in common in their ideology and aesthetics. Here and there ordinary soldiers, accompanied by futuristic ideas, had the reason to imagine themselves, if not supermen, then at least men of the highest standard.

The same, but less radical, processes took place in the armies of the older states. Thus, by the beginning of World War II, volunteerism and the notion of civic duty had permeated the military ideology of the United States and Britain. In today’s world, involuntary participation in the armed forces of developed countries is an exception, and most wars are waged with the highest motivation of the personnel of the parties.

The old ideas about military duty as the highest act of senseless patriotism and the desire of soldiers to disperse at the first opportunity have become a thing of the past.Of course, this cannot be said for everyone when speaking about the armies of developing countries.

Column of the Armed Forces of Ukraine. Kramatorsk, April 2014

For example, in the modern Ukrainian army are present all military eras. In the ranks of the Armed Forces of Ukraine there are both volunteers and patriots, as well as professionals and careerists, and conscripts mobilized against their will. There are cases of both high military motivation and complete demoralisation and desertion. More than once the Ukrainian military perished, knowing that they had nothing to hope for, and more than once ran to the enemy to surrender.

The Ukrainian military ideology in its state and civil versions is very heterogeneous and can appeal to each category of the population in its own way. The liberals see in the army the chance to defend the gains of the revolution, the nationalists — to affirm the self-determination of Ukrainians and so on. Leftists also have their own interest in the ranks of army — those who remained faithful to the ideals of freedom and the class approach in political analysis, and haven’t chosen the side of Russian imperial militarism in terror of the «fascist junta» and «imperialist conspiracy.»

Those who saw in the unsuccessful bourgeois revolution of Maidan the opportunity to wrest society from the clutches of post-Soviet «nepotistic capitalism», devouring the state and corruption, consider the armed resistance of Russian aggression, military and partisan training, participation in regular and reserve parts of the army as a way of standing in this war on the side of progress.

There are also the anarchists involved as well, despite the stereotyped image of the scum unsuitable for military discipline. Historically, anarchists have always opposed armies and wars. But we must understand that at the time of the formation of anarchist ideas, the armies were servants of empires, who fought for the ambitions of their elite. Soldiers recruited from the poorest sections of society were oppressed in triple: as disenfranchised and exploited working people, as representatives of colonized peoples and as cannon fodder. But there were exceptions — national liberation wars (for example, Italian), which had wide support among the anarchists.

Barricade of the Paris Commune, 1971

The uprising of the Paris Commune, which had regular forces, and the civil war in the former Russian Empire had already occurred with the most active participation of anarchists, who acted as one of the leading forces. Relevant to anarchist goals and values ​​were the Revolutionary Insurgent Army of Ukraine — a full-fledged military organization, despite all Soviet stereotypes about drunken mob of navy soldiers and bandits.

One of the commanders of the Makhno army Semyon Karetnikov (center)

Afterwards there was the Spanish civil war, where tens of thousands of people stood up for the protection of anarchist order in a number of regions. There were anarchists during the Second World War and in the ranks of the French Resistance. 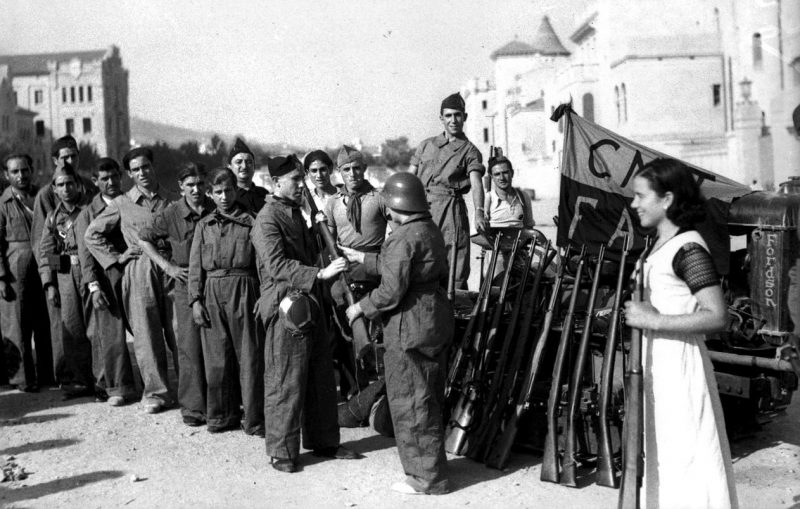 The anarchist militia receives weapons. Spain, the period of the Civil War 1936-1939

The logical conclusion is that the anarchists are not against the military organization, but against the goals set by the aggressor state, the imperial state, and the humiliating elements of military discipline that are still present in the armies of almost all countries of the world.

The anarchist military ideal is volunteerism, the formation of troops on a territorial basis, the defensive and / or liberation principle of their work, mutual trust and respect between soldiers and commanders, general awareness of the goals, risks and consequences of military operations.

Volunteers of the International Freedom Battalion in the composition of the YPG troops, Syrian Kurdistan, present day

However, anarchists are ready to accept the shortcomings of the army if they act on the side of the weak and oppressed (a word to those who believe in fairy tales: the armies of the Donetsk and Luhansk «people’s republics», surpassing in fineness of military equipment and the regularity of its supplying the army of Ukraine, are neither weak nor liberating).

The history of anarchism abounds in militaristic moods and participation in armed conflicts. However, after the First World War, the attitude of the anarchists towards war has seriously changed. A number of ideologists who quite rightly regard the past armed crisis as an infernal meat grinder, came to the conclusion that they should abandon wars as, according to Max Nettlau, «the most antisocial, anti-anarchic actions of people.» The same author, frightened us with the horrors of future conflicts, even more cruel and murderous, «which will be conducted with the help of toxic gases and mass extermination of the population,» came to deny the participation of anarchists in the war in principle.

Nettlau saw in the motivation of the military, even anarchist, exclusively patriotism and work for the state. His doctrinal anti-war text «What Anarchists Should Do in case of  war», written in 1931, although denying the performance on the side of the strong, still did not foresee the confrontation with fascism, when the Spanish anarchists so «perfidiously» started supporting the Republic against the Francisco Franco’s far-right rebels. The outcome of World War II, which proved the harmfulness of the pacifist policy that allowed the crimes of the Third Reich and its allies to happen, proved that the motive for participating in a war can be much broader than patriotic and statist.

The fighters against the Islamic state from the number of LGBT anarchists. Syria, present day

The new conflicts do not fit into the usual doctrinal framework of the anarchist rejection of war. In the twentieth century, wars ceased to be a contest of empires, little differing from each other. Since then, armed conflicts have edged in the direction of confrontation between legal systems, worldviews, and social projects.

The vulgar anarchist anti-war agenda, equating the Kurdish liberation nationalism of Rozhava to the cannibal ferocity of the Islamic state is a vivid example of a misunderstanding of what is happening to the world. Approximately the same can be said about the attitude of many anarchists to the Russian-Ukrainian conflict, in which they saw «the interests of oligarchic elites», and not an imperial attempt to suppress social and political development in the former colony.

«People are not born as a soldiers, pople die as a soldiers». Member of the anarchist «anti-war picket» equating Russian invasion and Ukrainian defence. Volgograd, Russia, February 2015

Ukraine is not the best country in the world, but in the face of the lack of freedom, repression and obscurantism of the prison state called the Russian Federation, it becomes clear that there is something to protect in this war.

How could it happen that by the 21st century the anarchists have sunk to the belief that war is not a given thing to be dealt with, but some kind of metaphysical category or «raving» choice in a role-playing game? Why didn’t the anarchists from the imperialist states, waging war for the retention of the oppressed peoples, take their side?

How do the anarchists of all countries of the world hope for a liberating revolution if they are not able to oppose, in any form, armies ready to pounce on the collapsing neighboring state? Revolutionaries should keep this in mind and every time they make a decision about insurrection, ask themselves: «What have we done to prevent us from being strangled, like newborn kittens?»