Biologists from the Kyiv National University have a saying: «Everything that happenes in Kaniv – remains in Kaniv.» Writing this text I want to break a closed cycle of silence about violence and shifting responsibility.

A bit about the protagonist: Ph.D., the head of the Kaniv practice during (think about it) 12 years, associate professor. And the harasser.

On the first year of university, Romanenko Petro Oleksandrovich was teaching my group the botany of non-vascular plants. During seminars in Kiev he did not care about students’ personal space: he sat down next to girls at the desks, came way too close and allowed himself things as a little hug while showing how to work with a microscope. A bit of flirting here, a little hitting up there. But nobody paid attention to that. Those are just jokes. Just words. Well, he is a professor — who could say anything to him?

He also was teaching during our practice in Kaniv. It was our first of four weeks in Kaniv Nature Reserve. The botany of non-vasculat plants was held during the first week. In addition to walking on swamps in rubber boots, collecting and examinating of the material, some less pleasant moments took place.

For example, one day, after a tour to the forest, he offers to bring me and several more students to Kaniv supermarket on a car. When my groupmate sits forward, he stops him and says «let the girl sit in the front, she will be a flight attendant, preferably the most beautiful.» No one pays special attention. Except me, of course, because I had to sit there.

During a boat trip:

So the situation looked like this in my eyes: we went by boats to the island, where there are, according to Romanenko, unique conditions, «the rose of winds». Paddling an hour going there, an hour going back. Then half an hour through the forest, through the thickets and bushes, deeper into the forest for the mushrooms and lichens. We stand in the woods, on a slope, nobody knows the road back, (besides the proffesor) there is no connection, no internet indeed.

As we walked through the woods, the clothes got full of burs stuck on it. Romanenko is telling something, then his gaze is distracted by the thorns stuck to the hips of my groupmate. And he interrupts the lecture and says «Oh! I would like to be these plants on your clothes» — approaches the girl, without asking permission begins to shave off her trousers of the plants. And he laughs. And my groupmates laugh. It’s just a joke. Everyone except me. And the girl stands there scared and moveless. 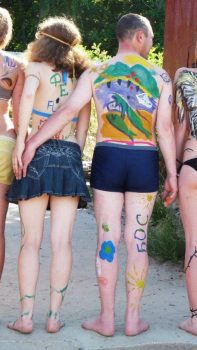 From the words of classmates and fellow students, senior students and graduates:

2018: The situation repeats. There are underaged among those who he is hitting up on. Including three of the four girls who lived in our room. All girls except me. I was not on that disco because of a tick bite.

2012: Petro Romanenko during the classes is laughing with students saying that he will come to some girls at night into their room, because he has the keys. And one time he comes after the retreat. He sits down onto her bed, initiates a conversation, puts hands on her knees. The girl, who told me about this situation, admitted that after this situation she was scared during the rest of the practice and slept poorly.

2018: After the trip to the forest one of the groups brings a bag full of mushrooms. The proffesor offers to clean them with two girls and then fry te mushrooms during the «fire». (The «fire» is a traditional attraction during the practice, when students invite a proffesor, ask the head of the practice for permission mentioning the place in the reservation where everything will be held. They bring food, guitars, set fire, sing songs and communicate.)

The next day, around 4:30 pm: the director of the reserve, a Petro and two girls are sitting on the river shore. He touches one of the girls inappropriately, trying to pat her hips, grabs her on the breasts. He says: «Just look at that! I am touching her and she is not even against it!» The director of the reserve is silent. The girl is numb and cannot move. She is underage. Romanenko is 48 years old. Then Romanenko goes somewhere, and the guard of the reserve begins to tell, calmly, as if nothing had just happened, about prison and knives.

Student’s «fire», 2013: Romanenko pulls a student to himself, falls to her, touches. Girl’s friend says: «Stop it immediately.» Then Romanenko brings an axe, asks the boy to leave with him for a conversation.

Romanenko says: «I do everything I want. And they like it.»

— You are harassing. Physically and morally. I do not like this.

— I’ll make you out of the university. You are telling me that?

In the end, the student was not expelled, as well as P. O. Romanenko, actually.

Petro Romanenko is drunk, adressing one of the girls: «Why are you trembling? Frozen? Warm her up, guys.» Someone says «And why won’t you get her warm?» Answer «I cannot, because I will get a boner.»

In 2018, students of the first year adressed the head of the practice. They wrote an application about Romanenko. Vladlen Trochymets believed the students, and threatened the harasser. But the application was not sent to the head of university, because the students asked not do it. Because they did not imagine that everything was so serious. They didn’t know about all the situations, that had been going during more than ten years.

On January 23, 2019, a new statement was written, demanding the retirement of Romanenko. It is still under consideration.

Adding from myself: my Kaniv practice was completely spoiled by negative feelings and fear. No one should feel the same way. Universities should be safe. Never keep silent when you see violence. Instead of accusing the victim, publicly condemn the abuser.

Hopefully, I will be able to change the NSC for the better.