The real trouble with martial law 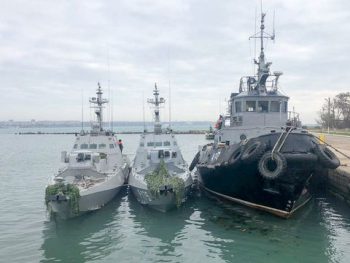 Lately there has been an explosion of panic and propaganda regarding the declaration of 30 days of “martial law” in Ukraine. From the beginning it was presented as an attempt by Poroshenko to seize more power and save himself from defeat in the upcoming elections. It was portrayed as a massive failure for Ukrainian democracy by many observers who seemed to completely miss the fact that Poroshenko was forced to drastically reform his proposal and compromise due to pushback from the Rada. As I pointed out at the time, this actually speaks positively about the state of Ukrainian democracy, flawed as the current system certainly is.

Another common objection I do not understand is pointing out the fact that Poroshenko didn’t declare martial law in 2014, when Russia was in the process of actually invading Ukraine and major combat operations were taking place. This has also been used to imply that that the president’s decree is some kind of electoral stunt. However the argument quickly collapses upon closer inspection. The 25 November incident near the Kerch strait represented the first time Russian forces openly launched an attack on the Ukrainian military and then proceeded to blockade the strait to Ukrainian shipping for several days. As unpredictably as the Kremlin has behaved since 2014, it would not be unreasonable to infer that this latest incident could indicate an imminent renewal of hostilities under a different pretext. Erring on the side of caution is understandable.

Naturally there have been some blunders in the execution. For starters the term “martial law,” especially in light of what has actually been declared, is rather inappropriate. Something like a “state of emergency” would have been far more accurate and desirable in terms of optics, but Ukraine’s legislation on a state of emergency is not suitable for the current situation, whereas the legislation on martial law is. Another major problem seems to be the misunderstanding among different authorities in different regions as to what the law actually entails. Lastly, the decision to not admit male Russian citizens at airports like Boryspil in Kyiv, which is not affected by the martial law, seems haphazardly applied. If the measure is aimed at mitigating a potential ground invasion or offensive from the occupied territories, it makes sense to limit entry into the eastern oblasts where the law is in effect, especially from buses and trains. This would prevent a repeat of events in 2014, when Russian citizens were bused into cities like Donetsk in order to drive out pro-Maidan citizens and create the impression of a pro-Russian mass movement. But such people will not be flying into Kyiv, and any claim that this is aimed at spies is absurd since everyone knows Russia frequently employs female agents.

Is there anything genuinely good about Poroshenko’s action? I can see at least one positive effect, namely the readying of the armed forces and the call-up of reservists. This sends a clear message that any offensive will not be a pushover like in 2014; on the contrary, it would be much more costly. Of course the value of this depends on how efficiently the Ukrainian armed forces can mobilize at the moment. If there are widespread problems, it has the potential to embolden the Kremlin. But assuming things go more or less to plan, the 30-day martial law could serve as a potential deterrent.

Make no mistake, I do see a major looming problem with this martial law, just not the one most of its critics are talking about. To me the danger is that it will ultimately be an empty gesture. Yes, it can have a deterrent effect by demonstrating that Ukrainian territory can no longer be easily taken from the march and the tactics of 2014 will no longer suffice. The problem is that Putin has the initiative. He still has the Ukrainian ships, their crews, and control over the Kerch Strait and by extension, the Sea of Azov. He has again demonstrated that he can still cause significant damage to Ukraine without suffering any serious consequences. A stronger defensive posture in Ukraine could make a new invasion more costly, but that requires an actual invasion. Otherwise Putin’s still left in control of the battlefield with no significant losses.

No doubt the Kremlin is listening to see if any new sanctions will be added in response to the most recent aggression, but I haven’t seen any concrete proposals yet. Recently it was reported that the US intends to send a naval vessel into the Black Sea “near” to the location where the incident took place in international waters, but so what? The US can send a carrier group there and the Russians will sneer and maybe carry out snap drills, but practically speaking the presence of these ships won’t amount to much more than the NATO troops marching in the Independence Day parade in Kyiv.

This has been the pattern through the whole war. Putin seizes the initiative, does something, and then the world just reacts. Western leaders urge restraint. Sanctions are introduced and increased, yet there has been no significant change of course in Russian foreign policy when it comes to Ukraine. The Kremlin simply hasn’t faced any consequences severe enough to make concessions seem preferable to losing face by appearing to give into pressure. So what happens is they hold the course and periodically raise the stakes, such as in the summer of 2015, the winter of 2017, and now with what appears to be a genuine effort to assert control over the Azov Sea and use this to exert more economic pressure on Ukraine.

This pattern thoroughly demonstrates the inadequacy of Ukraine’s liberal “patriots,” the sort who demand Ukrainians shut up about ongoing corruption and other social ills “because there’s war!” I’ve encountered quite a lot of these types and over the years I cannot help but notice that for as much as they invoke the war in order to silence their opponents and critics alike, they suddenly go silent when you ask them what they plan to do to win that war. Here the patriotic bluster ends, and there is mumbling about joining NATO, which will not happen so long as Ukrainian land is occupied, or a UN peacekeeping mission, which is equally fantastical seeing that Russia will never allow any UN peacekeeping mission that does not conform to its liking, i.e. peacekeepers limited to the line of contact rather than the whole of the Donbas up to the Russian border.

Thus the rhetoric of such “patriots” resembles a see-saw. If you criticize their failure to fight corruption and improve living standards, or if you criticize counter-productive policies that hurt Ukraine’s image or alienate its own citizens, they scream about the war and demand to know why you don’t talk about Russian aggression, even if you actually do, all the time. Ask them how to win this war that supposedly preoccupies them constantly, and the mighty kozak warrior suddenly dons a three-piece suit and tie and starts talking about diplomacy, political solutions, and fantasies about some NATO ex machina to save the country.

This attitude perfectly serves the Kremlin thanks to the pattern of conflict described above. Having achieved some breathing room in 2015, Ukraine’s ruling class went about passing a great deal of laws which were essentially performative gestures, unconcerned about how some of them might have alienated large segments of the population, including those in the occupied territories that the “patriots” supposedly want to recover some day. Corruption and declining living standards weren’t such a priority. I’m reminded of professor Alexander Motyl’s incoherent article for the Atlantic Council, in which he rambled on about the topic of “change” in post-Maidan Ukraine. Truly he is the embodiment of this attitude of complacency and the inability to connect Ukraine’s domestic problems with the roots and conduct of the war. It is the attitude that sees the Russian occupation as a blessing in disguise because it removes the need to engage with segments of the Ukrainian population who do not fully share the self-proclaimed “patriots'” vision of what Ukraine should be. In short this kind of “patriot” is entirely defensive, willing to retreat behind lines drawn ever westward in the vain hope of “escaping” Russia’s orbit and hiding within Europe. It is precisely this attitude that allows Putin to slowly roll up Ukraine’s defenses at his leisure.

Hopefully this new offensive to control the Azov Sea provides a wake-up call to such people or those who listen to them. It shows that Putin can still exert serious pressure on the country with impunity. The war is very real and it is an existential threat to Ukraine, not to mention Russia itself and the subjugated and colonized people within it. It is perfectly understandable and in fact commendable to criticize those who devote all their attention to internal problems, acting as if the war is some peripheral matter, however, it is equally unrealistic to act as if those problems have no effect on the outcome of that war. There’s nothing terribly revolutionary about this concept history is full of examples of countries easily succumbing to invasion due to internal instability and weaknesses, just as there are examples of smaller countries thrashing or driving out much more powerful adversaries thanks to high morale, national unity, good leadership, clear vision, etc. These are not things a government can just legislate into existence with censorship or state-approved historical narratives- they must be earned. I have little faith in the Ukrainian government, consisting of members and servants of the ruling class, to cultivate these things, meaning that burden inevitably falls on the shoulders of the masses- the citizens of Ukraine, the worldwide diaspora, and all those who have taken up this struggle against imperialism and reaction.

If there is progress in this struggle, there is a chance that Ukraine can break this pattern in the war and begin to turn the tide. Instead of Putin holding the initiative, Ukraine will set the tempo of military operations and decide the terms on which they will take place. By creating a new, internationalist revolutionary movement with the help of the three aforementioned groups, we will no longer have a situation whereby Russia carries out full spectrum warfare against Ukraine while the latter is forced to rely on conventional military power that can never equal that of Russia and thus cannot, by itself, drive out the occupiers.

Instead Ukraine will be able to counter Russia with its own full-spectrum warfare, which would include the kind of unconventional insurgent strategy and tactics which can be used offensively instead of strictly defensively, as with Ukraine’s current conventional armed forces. I know this may seem incredible to some readers, but what I’m describing is by no means unprecedented, and as difficult as it may be to implement, it is far more realistic than the fantasies about NATO membership, a UN peacekeeping mission, or reacquiring nuclear weapons.

So unless the current martial law is extended and expanded, I don’t see it as a serious problem. As I already wrote, it can have a very real benefit as a deterrent, but mainly I’m more concerned about the larger problem this whole situation highlights, the problem of Putin holding the initiative.